Manuel Pellegrini insists that Manchester City answered the test of the Manchester derby on Sunday. 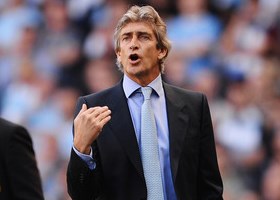 City hammered reigning champions Manchester United 4-1 at the Etihad Stadium and the performance of the players was something Pellegrini was quick to revel in.

The Chilean, in his first Manc derby as City boss, was absolutely delighted with the performance which has the 2011/12 Premier League champions sitting third on the table.

The 60 year old said : “I’m very happy. The way we played is the way I want this team to play, very similar to against Newcastle. We played the way we work all week,”.

“We went 4-0 up and Manchester United didn’t have a really clear chance apart from a beautiful free-kick by (Wayne) Rooney and one corner.

“We have been playing irregular in other games, but it is normal in this moment of the season.

“This was a high test today and the players had a great answer.”