According to reports by BBC News, Argentine legend Diego Maradona says his compatriot Lionel Messi did not deserve the Golden Ball award at the World Cup. 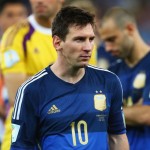 The 27 year old picked up the prize for the tournament’s best player following Argentina’s 1-0 defeat by Germany in the final at the Maracana stadium.

“I would give heaven and earth to Leo,” said Maradona.

“But when marketing people want him to win something he didn’t [deserve to] win, it is unfair. I could see that he didn’t want to go up and collect it [the award].”