Reports are out claiming that Barcelona face being trumped by Borussia Dortmund for Borussia Monchengladbach goalkeeper Marc-Andre ter Stegen. 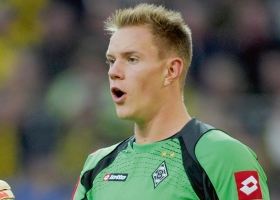 It is said that Barca sports chief Andoni Zubizarreta rates the 21 year old German international as the ideal replacement for want-away Victor Valdes and has held talks with his agents about a summer move.

However Punto Pelota claims that Ter Stegen will not be moving to Spain and instead is happy to remain in Germany and sign for Jurgen Klopp’s BVB at the end of next season.

Gladbach intend to upgrade the youngster’s current deal in the coming weeks, with the promise he will be sold – to BVB – in 2015.