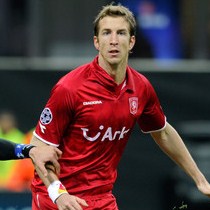 The Austrian captain has now scored 12 goals in 18 appearances for his new club. He previously played for Red Bull Salzburg where he scored a total of 75 goals in 108 appearance.

Regarded as a ‘goal getter’, the 27 year old, 6ft 5in striker has been in stunning form down the years and has never been goal shy.

Known for his goal scoring ability with either foot and power in the air, Marc Janko has all it takes to thrive in the English Premier League and clubs like Liverpool and Newcastle United will surely benefit by signing this ‘world class’ striker.

Twente reportedly paid Red Bull Salzburg between 4 and 7 million euro for Janko and Premier League clubs should have no problem signing him.

Manchester City and Aston Villa recently forked out crazy money to buy Edin Dzeko and Darren Bent respectively but they could have saved a lot of money if they had just signed Marc Janko.

Janko has been prolific for his clubs and he would definitely be eager to test himself in the English Premier League. Whether FC Twente would want to sell this natural goal scorer is a totally new question.

In any event, a talent like Marc Janko should be at a higher stage and at the peak age of 27, it is the right time for him to make a mark in world football.

Would you like to see Marc Janko play in the English Premier League? Vote now and let us know what you think. Cheers!

Drogba : I Am Not Worried About My Performance!