Reports are out claiming that Stoke City defender Marc Muniesa hailed the fans’ influence on victory over Arsenal. 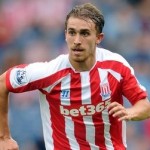 The result continued Stoke’s dominance of the home fixture against Arsenal.

The former Barcelona star said: “We know before the game that for Arsenal it’s a very big test to come to the Britannia – and the supporters know that too. From the first minute the backing we received was incredible.” Arsenal Boss Arsene Wenger Admits He Hides Himself Away After Defeat