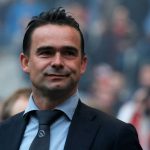 Reports are out claiming that Ajax chief Marc Overmars has urged Arsene Wenger to build an English core to Arsenal.

Overmars spoke with Arsenal Player about his time at the club.

“We had Ray Parlour, who had done extremely well. He delivered so much power and work so I could play with more risk up front because Ray was doing a lot of the defensive work.

“Same for Petit, same for Vieira – they let me play a little bit higher so that is why I could score a lot of goals.

“In my opinion, if it is an English team, it doesn’t matter if you are Arsenal or Chelsea or Manchester United, you have to get the base of English players.

“You have to get that idea, because it is good to have that feeling of support and the area and support as a fan.”