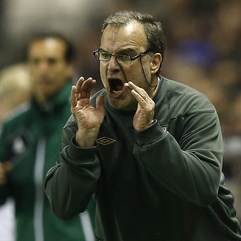 Marcelo Bielsa and Athletic Bilbao have sealed an agreement to extend the Argentine coach’s contract by a year until the end of next season, the La Liga club said on Sunday.

“Athletic Club and the coach Marcelo Bielsa have agreed to extend the contractual relationship between the two parties until June 30, 2013,” Bilbao said in a statement on their website (www.athletic-club.net).

Roy Keane Set To Be Named As Manager Of Kasimpasa