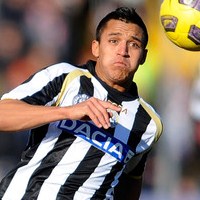 Inter Milan chief Marco Branca has revealed that the club is dropping out of the race to sign Udinese winger Alexis Sanchez.

Branca revealed that Inter Milan could not compete with Barcelona and Manchester City for the Chilean international.

Branca told BBC Sport : “Sanchez is a player we liked,”.

“Manchester City raised their bid for him to €35m plus a bonus, which ruled us out of the race.

“In the end, the player preferred to go to Barcelona and they got him for €28m and a €10m bonus. Not many clubs can afford that.” Wesley Sneijder Determined To Prove A Point To Real Madrid