It has been reported that Sporting CP defender Marcos Rojo has declared he’s joining Manchester United. 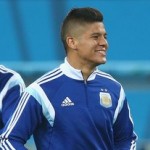 Record reported that Rojo confirmed on local Argentine radio that a deal has been agreed to move to United.

“It’s a dream to be a Manchester United player. To leave Sporting was not easy,” said Rojo on Continental.

United are expected to sign the World Cup veteran for £16-18 millon.

Rojo returned to Sporting training yesterday, having apologised for playing up last week as Sporting attempted to hike up his asking price.

Also in his Continental interview, Rojo admitted the chance to follow fellow Argentines Juan Sebastian Veron and Gabriel Heinze in pulling on the United shirt was appealing.