Reports have emerged claiming that Marcos Rojo faces another wait over his Manchester United debut. 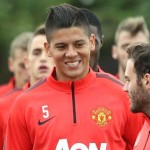 The Daily Mail reported that the Argentine international defender will not be allowed to make his debut against MK Dons on Tuesday night as issues with securing a work permit continue.

Louis van Gaal had hoped Rojo would be available to take part in United’s 1-1 draw with Sunderland on Sunday, but will now target the away game against Burnley on Saturday.

The 24-year-old defender completed his £16million deal to United last week but will have to wait until his work permit is given the green light.