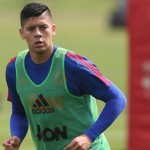 Rojo has yet to feature for the Red Devils so far this term after missing their pre-season tour of the US because of passport problems.

But the Argentine defender, 25, said: “He [Van Gaal] has a really strong personality, but he is a great person. He has a bulldog face, but he is great guy.

“He’s scary at first, but when you get to know him and relate to him on daily basis, you get along. But only if you listen to him.”