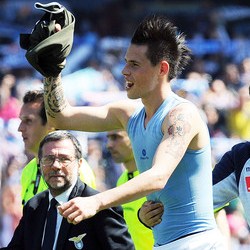 The Napoli midfielder has been linked with a move with the Italian champions for the 2011-12 season and the player has not exactly ruled out such a possibility.

The Slovakia international told newspaper Pravda : “It’s difficult to predict when is the right time to leave,”.

“I have grown a lot with Napoli in these past few years.

“I’m young, but I still haven’t won anything. Not a League championship, not a cup competition. I would say that it’s time to win something now.

“It’s true that President Aurelio De Laurentiis doesn’t want to sell me, but nothing is for certain. I speak to him regularly – he’s fun and generous. I can talk to him about anything.

“[Milan boss] Massimiliano Allegri and [Vice-President] Adriano Galliani have praised me and joining Milan would be the turning point of my career.”

Thiago Silva : I Hope AC Milan Can Pick Themselves Up