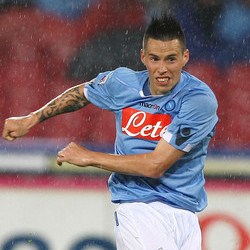 Marek Hamsik has once again left the door open to a move to AC Milan.

Both clubs have denied speculation of a potential deal for the 23 year old Slovakia international.

However Hamsik says: “I’ve heard that there has been a lot of talk, not all of it true.

“I’m happy at Napoli and I’m in no rush to leave, but if a big club made an offer then Napoli and myself would think about it.

“But it isn’t as if I have to leave Napoli.”