Mario Balotelli Dedicates Goals Against Germany To His Mother 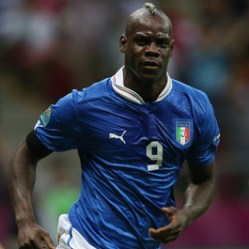 Mario Balotelli was thrilled with his performance in Italy’s Euros victory over Germany.

The Manchester City striker bagged a sensational brace in the 2-1 semi-final victory over Germany.

“At the end of the game when I went to my mother, that was the best moment. I told her these goals were for her,” he said.

“I waited a long time for this moment, especially as my mother is not young anymore and can’t travel far, so I had to make her happy when she came all the way here. My father will be in Kiev for the Final too.

“Before the game there were my mother, my brothers, my sister-in-law and my best friend all by the touchline. Having my nearest and dearest there obviously fired me up. What music do I listen to before the game? Drake. He’s a friend of mine.”

With this brace, Balotelli took his Euro 2012 tally to three goals and is the joint top scorer, but also the only one still in the tournament.

“I will try to win the top scorer award. In football sometimes you can try so many times and it doesn’t go in, or try few and it does all the time.

“It was a fantastic assist, the kind only Antonio Cassano can provide, while Riccardo Montolivo’s pass was great too. I celebrated? I said I would.”


Adel Taarabt : I Want To Stay With QPR!