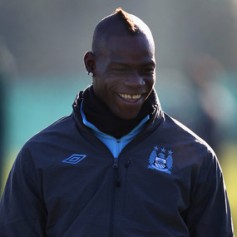 Balotelli is expected to earn €4m (£3.4m) a year, a paycut from his current £110,000 per week deal at the Premier League champions, and sign a four-year contract with Massimiliano Allegri’s side.

City were understood to be holding out for £22 million from Milan, while also insisting that a 15% sell-on clause is added to any deal, but it is believed the club have since eased their stance.

The 22-year-old said goodbye to team-mates and club staff after Monday morning’s training session at Carrington, as he prepared to leave for Italy after a tumultuous time in England.

Balotelli’s stock fell further after a training ground bust-up with manager Roberto Mancini, and although he was subsequently dropped from the first-team but given a reprieve by the 48-year-old, he was made available for transfer.

Filippo Inzaghi : I Deserve To Play!

Zlatan Ibrahimovic : The Best Team Does Not Always Win!