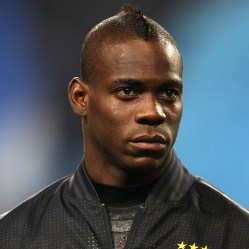 The Mail on Sunday says Balotelli fired Manchester City five points clear in the race for the Premier League – then learned he will be hit with a £250,000 fine for visiting a strip club 36 hours before the 2-0 victory over Bolton Wanderers.

Furious City boss Roberto Mancini vowed to punish Balotelli ‘the maximum possible’ after waking up to pictures of the player visiting the inappropriate X In The City nightspot in Liverpool in the early hours of Friday morning.