It has been reported that Liverpool striker Mario Balotelli has taken aim at former Italy coach Cesare Prandelli. 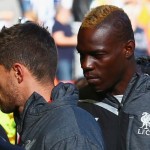 The Italian international striker fell out with the Galatasaray boss at this summer’s World Cup.

“I am a face-to-face person.” Balotelli told Talksport.com.

“I understand why I am not in the squad. I haven’t been scoring, but other players like [Graziano] Pellè and the other strikers have been. So they deserve to be there, but I love Italy and nobody can ever say anything about my national team.

“I will always love it, but I have to be honest and say I was disappointed at what people were saying and how they were blaming me after the World Cup.

“I think I had two, maybe three chances in all the tournament. Everyone knows I scored against England, but I couldn’t do much else.

“Even Cesare Prandelli has said bad stuff about me. Should he be going and talking to the newspapers about me straight after a game? I did not expect that and I did not reply, because there is no point.

“I think real men, if they have something to say, then they come to you and say it to your face. I am a face-to-face person, a straight person.”