Reports are out claiming that Mario Gotze has caused somewhat of a surprise be including Arsenal midfielder Jack Wilshere in his five-a-side dream team. 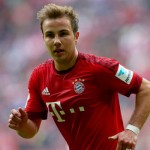 The German international has been linked with a move away from Bayern Munich this summer, with Manchester United and Liverpool both believed to be interested in the 23-year-old.

However, it’s not the transfer rumours surrounding Gotze that have put the German international in the headlines recently, but rather the shock inclusion of Wilshere in his five-a-side dream team.

The Daily Express is reporting the German international featured Wilshere in his dream line-up alongside Paul Pogba, Andres Iniesta, Thiago Silva and Rafinha.

“I played against him in the U-17 European Championships,” Gotze said of Wilshere.