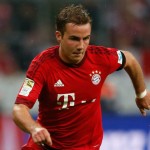 Reports are out claiming that Bayern Munich fear Mario Gotze has made up his mind on a move to Liverpool.

Bayern Munich fear that Gotze has set his heart on linking up with Jurgen Klopp at Anfield, according to the Mirror.

The Germany midfielder made his name playing under Klopp at Borussia Dortmund.

And he believes that his former boss can help him help kickstart his career that has taken a nosedive.

Gotze, 23, played the best football of his career under Klopp and is said to be open to a move to Anfield.

Arsenal are also said to be keen on the talented midfielder.