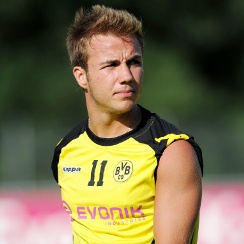 Interesting transfer news are out and it has been revealed that Borussia Dortmund star Mario Gotze wants a move to the Spanish Liga.

The German international star is being chased by Arsenal, Chelsea and Manchester United, but BILD says his dream is to play in Spain.

If he is to leave Dortmund in 2012, Gotze would prefer to join either Real Madrid or Barcelona over any Premier League club.

The attacking midfielder is inside the final two years of his current deal.