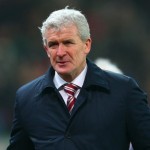 Reports are out claiming that Stoke City boss Mark Hughes admits they were outclassed in their 3-0 defeat at Arsenal.

Hughes accepted his side just never got going.

“We were second best to a good Arsenal side. We allowed them to get the initial goal and it was a difficult day for us,” said Hughes.

“This is disappointment for us as we have been better against the better teams this season.”

“When you see the power he has got and the pace, he is outstanding,” said Hughes.

“When you try to close him down in close areas, he has intelligence and understands where everyone is.”