Reports are out claiming that Stoke City boss Mark Hughes feels former club Manchester United are getting back on the rails. 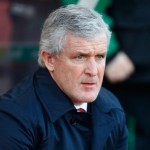 Hughes admits that United boss Louis van Gaal is cutting an increasingly impressive and reassuring figure for those that want his club to re-reach the heights they once took for granted.

“He’s trying to work hard and certainly change personnel and change shape and formations, and that takes time.

“Whether or not he’s clear which way he wants to go, only time will tell, but he seems to be the right figurehead for the club and the guy they need.

“They need a strong person at the head of the club and he certainly gives that impression to everybody.”