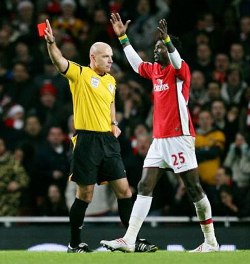 Manchester City manager Mark Hughes has stated that he wants Emmanuel Adebayor to get physical and beef up Manchester City’s strike-force.

It was also reported that the world’s richest club were last night still locked in talks with the Arsenal forward,now aged 25, over his proposed £25million switch to the Eastlands.

Cash rich Manchester City signed striker Roque Santa Cruz and Carlos Tevez so far this summer and already had Robinho and Craig Bellamy on the books.

Mark Hughes recently told reporters that Adebayor is a player that is proven in the Premier League and can score goals at the top level and that he has a physical threat that we haven’t had in the past.

Hughes said that it would be fantastic if Emmanuel Adebayor decides to join Manchester City.

Jorginho To Turn Down Arsenal, Chelsea For Hellas Verona Stay