It has been reported that Mark Schwarzer has welcomed Cesc Fabregas to Chelsea. 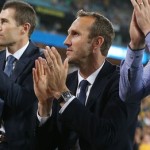 On Cesc, he told talkSPORT: “It’s a big shame losing someone like Frank Lampard who has been an unbelievable player in the Premier League. He’s a world-class player and it’s a huge loss for Chelsea considering how long he has been at the club, but he’s obviously looking for another challenge.

“With Cesc Fabregas, you’re talking about another world-class player replacing [Lampard]. That’s what happens at the top end of the league and at clubs like Chelsea. Players of equal quality replace the old ones.”