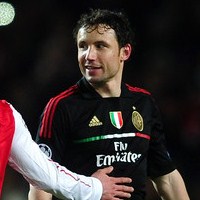 Mark van Bommel has opened the door to staying with AC Milan next season.

Speaking with Sky Sport Italia, the Dutch midfielder has suggested that he would sign a new agreement with the Diavolo.

“I’m happy at Milan and I’ll speak with Vice-President Adriano Galliani in the near future in order to understand what Milan want,” stated the man netted from Bayern Munich in January 2011.

“I have to thank Galliani and director Ariedo Braida for signing me at my age. I’ve always said that I want to end my career at PSV, but I still don’t know when that will happen.”