Reports are out claiming that Mark Warburton is delighted to have Gedion Zelalem with him at Rangers. 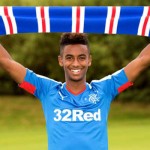 The 18-year-old Arsenal midfielder has joined the Scottish Championship side on loan until January and Warburton admits it is a pleasure to have a player of such raw talent at his disposal.

“It’s nice to have him on board and a lot of work has been done,” Warburton told club’s official website.

“I’m thankful to some really good people at Arsenal and the work done by people here at Rangers.

“There is no doubt he is a very talented young player and I’m sure he’ll have an impact for us.”

Zelalem, who trained with ‘Gers for the first time on Monday, links up with Tottenham pair Nathan Oduwa and Dominic Ball at Ibrox.