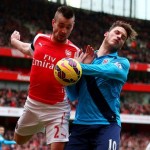 Arsenal’s Mathieu Debuchy was taken off on a stretcher in considerable pain during the club’s Premier League match against Stoke City on Sunday.

Debuchy suffered what appeared to be a nasty shoulder injury in an incident with Stoke forward Marko Arnautovic.

The Austria international appeared to shove Debuchy as the Frenchman ran out of play.

Debuchy collided with the advertising boards at Emirates Stadium and required lengthy treatment.

He was in lots of pain when being removed from the pitch and was taken for an X-ray immediately.

The Daily Mail reports the right-back has suffered a suspected dislocated shoulder as well as cuts to the face.