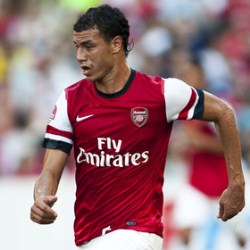 Reports are out claiming that Arsenal striker Marouane Chamakh is resisting interest from Blackburn Rovers.

The relegated Premier League club want to buy one striker and loan another with Leon Best out until Christmas, says the Daily Mail.

Arsenal want to sell Chamakh but the player is not keen on dropping to the Championship so it may mean Blackburn adding more names to their list from tomorrow.

West Brom Signing Lukaku : I Wasted My Time At Chelsea!