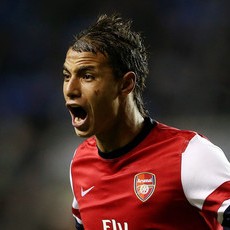 It has been reported that Fiorentina have received little encouragement from intermediaries over their pursuit of Arsenal striker Marouane Chamakh.

Viola officials made fresh contact with the Chamakh camp this week as they see the Morocco international an ideal addition in January to boost their surprise title chances this season.

But Chamakh, despite his problems at Arsenal, has no interest in leaving England.

If he is to be sold by the Gunners, Chamakh has informed his agents to find him a new Premier League club.