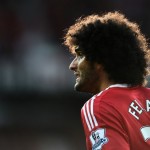 It has been reported that Marouane Fellaini has made it clear that another season without a trophy is not acceptable for Manchester United.

The Red Devils have missed out on silverware over the past two campaigns but Belgian midfielder Fellaini insists that result is simply not an option in 2015/16.

“We have to win something because we’re Manchester United,” he said.

United currently sit second on the Premier League after a solid start to the new season which has yielded four wins and a draw from six outings thus far.