It has been revealed that Marouane Fellaini has admitted relief over his deadline day move to Manchester United. 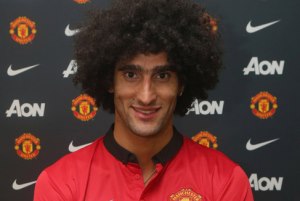 The former Everton ace signed for United in a £26.5 million deal.

The 25 year old Belgian international told Sky Sports: “It was a great week for me. It was nervous on Monday, but I have my transfer and I won with Belgium, so I’m happy.

“When I started the campaign with Everton, I looked forward for a transfer and in the end I am happy.

“I look forward to playing with the players. I need to work hard for my place. I want to win something with Manchester. I want to play a lot of games and win a trophy.

“It will be tough, every year it is tough for the big teams. But I think Manchester United have quality to win the trophy. I look forward to this.

“It’s a big step for me. But I have played for five years in England, I know the league and I know the players, so I don’t think I will have a problem with this move.”