It has been reported that Marouane Fellaini was happy to help Manchester United see off FA Cup opponents Sheffield United. 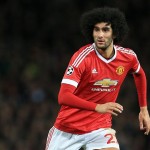 Despite failing to open up the Blades’ massed ranks at the back, Fellaini admits the hosts are happy they got the win.

“It was difficult against a team like that who come to defend,” he told MUTV.

“We tried to create chances and we kept the ball well. We had patience and, in the end, we won and we are now ready for the next game.

“They defended with 10 players, which is always difficult, and they did well here but they didn’t create any chances and we deserved to win.”

Fellaini acknowledges that there are no easy games in the FA Cup and he now hopes the Reds can progress further in the famous competition.

“Always in the Premier League and against lower league teams, the games are tough,” Fellaini said. “There are often surprises, like you can see in some other games, but we are in the next round and we are happy.

“The FA Cup is a big competition in England and we went to the quarter-final last season. We want to do better this season and we have the quality and the players, so I hope we can do that.”