It has been revealed that Marouane Fellaini is looking at a defensive role at Manchester United. 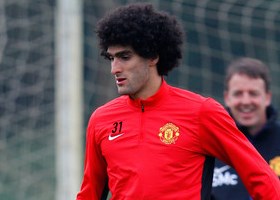 The Belgium international star made a £27.5m switch from Everton to United with just hours of the window remaining to finally end the club’s midfielder hunt.

“As a young player I played up front, on the wing, in midfield and when I started in the reserves at Standard Liege I played centre back,” he told FourFourTwo.

“During the last few years with David Moyes I played further forward and I scored some important goals, which is why he kept me there and I liked it because I was young and learning.

“But centre back was a good position for me because I am tall and good in the air, but I can also pass the ball.

“Maybe it’s a position for me in the future.”