Reports are out claiming that Manchester United midfielder Marouane Fellaini is keen to see a move to Napoli happen. 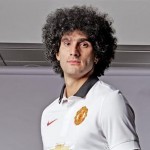 However, a move is yet to be sealed as United hold out for a permanent deal.

United want £15million for the 26-year-old, having shelled out nearly double that figure to sign him from Everton last summer.

But Napoli are proposing a season-long loan with a view to a permanent move. Eden Hazard : I Want To Play In The Premier League!