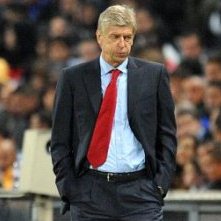 Both sides had penalty shouts for handball turned down in a busy first half but the game had slowed to a crawl by the time Ramsey coolly slotted past Steve Mandanda with seconds remaining.

Ramsey had started on the bench due to concerns over a hamstring problem but was in the right place to continue his side’s unbeaten run in Europe.

They now lead OM seven points to six and, in contrast to their faltering league form, are in control in Europe.