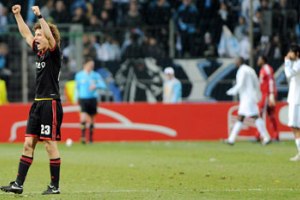 Alan Kardec came off the bench to inflict last-minute heartbreak on Marseille as his late goal sent Benfica through to the Europa League quarter-finals.

However, Kardec’s last-gasp goal, just three minutes after coming on and his first for Benfica, put the Portuguese team through.

There was further misery for Marseille when Hatem Ben Arfa was dismissed in stoppage time, seconds after coming on, for lashing out at the Benfica goalscorer.