It has been reported that Olympique Marseille aren’t giving up on keeping Andre-Pierre Gignac. 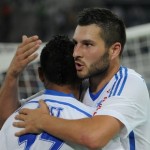 Gignac is off contract at the end of the season and is in contact with Arsenal about a January move to London.

However, OM president Vincent Labrune stated: “He’s in top form, we are happy with what he’s doing. For economic reasons we were unable to extend his contract until 2015, so he could break free but we are very motivated and will try to talk to him again to find out what we can do.”

Agent Christopher Hutteau recently revealed: “Given the fact that he is not very old, he has a real market value.

“This is a striker with a relatively atypical profile, responsive to the physical challenge, the archetypal player who can succeed at a big club.