It has been reported that Newcastle United and Arsenal are eyeing Marseille striker Andre-Pierre Gignac. 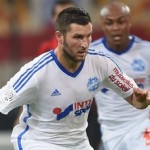 The French international has 10 goals in 11 games for Marcelo Bielsa’s side and is Ligue 1’s top scorer, but his contract expires at the end of the season.

Quizzed over the club’s inability to meet Gignac’s demands, Marseille president Vincent Labrune conceded: “It’s going to happen because employer contributions and taxes have gone through the roof in France.

“We would like to keep him, but it seems to me utopian to think that he will lower his salary to stay with us.”

Labrune remained hopeful that Gignac’s affection for Marseille might convince him to extend his deal.

“His agent is right to say that, with his current displays, he is more likely to get better offers. But he loves the city and the club, so we’re going to talk.”

The Mirror says Arsene Wenger and France-friendly Newcastle have been long-term admirers of the forward, who at 28 could be tempted by one last opportunity to move abroad.