Reports are out claiming that Olympique Marseille rejected a massive offer from England for Michy Batshuayi last month. 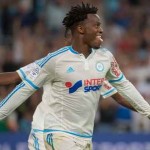 L’Equipe says OM turned down a £30 million bid from an unnamed Premier League club for the Belgian.

Having lost Andre-Pierre Gignac, OM could not afford to also part with Batshuayi this past summer.

The young striker has been likened to Everton ace Romelu Lukaku and been a long-term target for Arsenal, Tottenham and Manchester United.