It has been reported that Marseille are closing in on Manchester City youngster Karim Rekik. 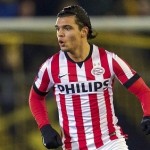 The French club have agreed a deal for the 20-year old Dutch defender who will officially join upon completion of a medical.

Rekik has spent the past two seasons on loan at PSV Eindhoven, helping the club to the Eredivisie title last season, and has had previous stints with Portsmouth and Blackburn Rovers.

“Olympique de Marseille and Manchester City have reached an agreement in principle for the permanent transfer of Dutch international Karim Rekik on Tuesday evening subject to passing the medical examination,” said a statement on Marseille’s official website.

Rekik arrived at City’s youth academy from Feyenoord in 2011 and has made three appearances for the senior team.