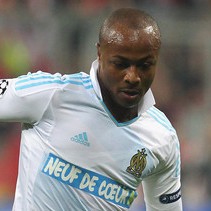 West Ham United target Andre Ayew has admitted that he could be lured away from France.

The Marseille forward has already made well over 150 senior appearances in his career and was among those to catch the eye as Ghana reached the quarter-finals of the 2010 World Cup.

The 22 year old also hinted that his younger brother Jordan, who has also been linked with the Hammers, could join him in heading for the exits at Stade Velodrome.

“We are very interested in playing abroad one day in our career,” said Ayew.

“There is no official bid from West Ham and if there is a possibility of one arriving, we will speak to our advisors.

“West Ham are an excellent team.”