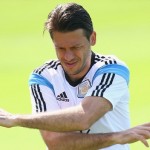 Before moving to Malaga, the Argentine international spent a year working with the Dutchman at Bayern Munich, but was sold to the Spanish side due to a lack of first team football.

The 33 year old told reporters : “I was irritated [when left out of the side] but I always recognised he was the best football-wise, for the concepts he has and how he imposes them on a team,”.

“He has shown that in this World Cup. But I didn’t leave because of him, but because of my own decision.

“For example, he’d get in front of the squad and say who was the best or worst at doing different things.

“He has a real determination in thinking about the team and potential consequences. I learned a lot from Van Gaal.”