Red Bull Salzburg defender Martin Hinteregger has admitted that he is honoured to be linked with Premier League champions Manchester United. 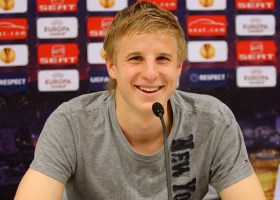 The 21-year old has been linked with United recently, as well as Arsenal, Liverpool, Juventus and Lazio, and has now claimed that there is actual attention coming his way.

Hinteregger was quoted by the Austria Press Agency : “There is an interest from Manchester United and some big Italian clubs,”.

“I am honoured by it. Honestly, I did not think that it could happen so fast. My goal has always been to play with the Red Bulls, but of course such rumours are flattering.

“With my agent Frank Schreier, I need to consider if there are the conditions for a change and what prospects I would have with a move to a top team.

“I am not a dreamer and I know that these clubs have many interesting players who have no space to play.”