It has been reported that Arsenal hero Martin Keown can understand manager Arsene Wenger rejecting the chance to buy back Cesc Fabregas from Barcelona. 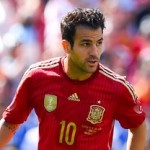 The Gunners are understood to have passed up the opportunity to bring Fabregas back to the club, leaving London rivals Chelsea in pole position to seal the 27-year-old’s signature.

“I’m not surprised,” said Keown, who made 449 appearances for the Gunners and was speaking on behalf of Official England Supporter williamhill.com.

“After Fabregas left, Arsene had to invest time in someone else and he doesn’t want to block their path if Fabregas comes back.

“Alex Oxlade-Chamberlain is someone who can play in that central midfield position as well as Jack Wilshere of course.

“Wenger probably feels he’s more than catered for in that attacking midfield area – it’s a defensive midfielder that’s going to be more purposeful in that Arsenal squad now.”