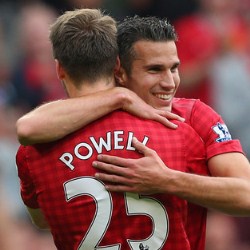 Keown wrote in the Daily Mail: “Winning so well at Anfield a week after the champions went there and struggled is impressive. It’s early days but it is possible that they could challenge for the title.

“Van Persie knows he must not fail at Manchester United. He left Arsenal because he wanted to win trophies and it will be unthinkable for him if Arsenal win one this season and United don’t.

“It must be a massive motivation for him and it showed against Southampton. Having missed a penalty, he could see the negative headlines. So he had to make amends. He’s taken responsibility for his team already because of his personal mission to win something. He has to make sure he’s scoring and that his team are winning and doing better than Arsenal.

“Van Persie looks like an inspired signing for United, who have bought the finished article, the outstanding player in the Premier League last season. If he hadn’t been there in the last two games, they would have struggled.

“People used to goad the Arsenal fans by saying they were a one-man team but Manchester United don’t look much different.”