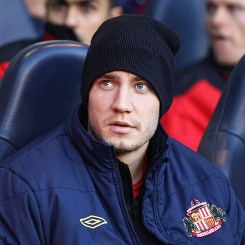 Sunderland boss Martin O’Neill is keen for Nicklas Bendtner to continue to prove himself at the club after an impressive display against Queens Park Rangers.

The on loan Arsenal striker, had, however, recently made the headlines for the wrong reasons when he was arrested along with Lee Cattermole on suspicion of causing criminal damage to parked cars in Newcastle city centre.

“He’s a fine player in the making,” the new Black Cats boss said.

“I do accept you could probably still talk about him having potential at 23 but there’s a cause there at Sunderland and really it’s up to Nicklas to want to be in that cause.

“He’s committed himself and I thought his performance was excellent (against QPR). He can be a real proper player.”

Arsenal Target Aron Johansson Set To Commit To The USA