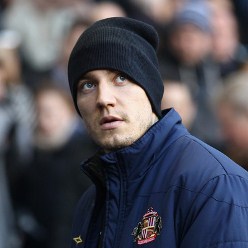 Martin O’Neill has revealed that no decision will be made anytime soon over signing on-loan Arsenal striker Nicklas Bendtner.

The Sunderland boss is just looking at getting the best out of him this term, and thinks Bendtner should be equally keen to show his best form.

“I have not thought about (a permanent deal) at all,” he insisted.

“I am acutely aware that players coming on loan – I have had this before – certainly for a while do not always think they are going to go back again. ”

“I have not had this conversation with Nicklas at all. If he is doing really well for us and would love to stay that would be fantastic. He has got to the end of the season and has time to prove he is capable of doing it.

“This is a fantastic challenge for him. He has the European Championships to look forward to. He was not playing regularly at Arsenal. Arsenal, whatever you say about him, were prepared to let him go for the season. This is a fantastic opportunity for him at a big club to prove himself in the Premier League week-in, week-out.”

Ronaldinho Linked With A Move To LA Galaxy