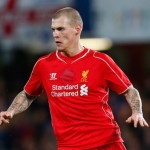 Reports are out claiming that Liverpool defender Martin Skrtel has become the latest Reds star to cast doubt over his Anfield future.

The Slovakia international defender revealed further contract talks with the club will not take place until the end of the season>.

Vice-captain Jordan Henderson and Raheem Sterling also have yet to sign new contracts.

Sterling, 20, has shelved contract talks with the club until the summer after turning down a deal worth £100,000-a-week.

Skrtel said: “Well there was the contact a few months ago, but at the moment I am just focusing on my game, you know, just focusing on the football and then we’ll see after the season ends then.”

Asked if talks had been intentionally put back until the summer, he said: “Not really.

“You know, we just said that it’s just that at the moment I am just focusing on my job and then after the season, if they want then we can talk.” Sevilla Insists Liverpool Yet To Agree Terms For Alberto Moreno