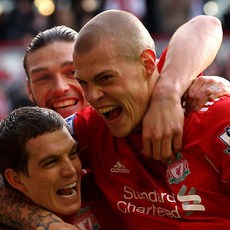 The Reds are currently lagging four points behind fourth-placed Arsenal despite some scratchy form this season.

Skrtel said: “It’s up to us to ensure we qualify for the Champions League.

“When you look at our games with teams in those positions at the moment I don’t think they are that much better than us.

“We’ve had close games with City and United and we beat Chelsea. I believe we can get there.’’