Martin Skrtel has declared that Liverpool are not considering a title tilt. 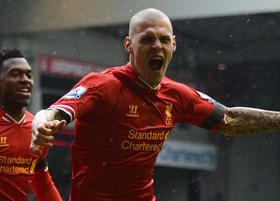 The 29 year old Slovakia international centre back was superb in victory over Arsenal.

The former Zenit defender told the Liverpool Echo : “No-one in the dressing room is talking about the title. We still have to play 13 matches and anything can happen so we are just going from game to game,”.

“We will try to get as many points as we can. We are fighting for the top four and the result against Arsenal showed we are ready for the battle.” Benitez has his sights on Napoli star Marek Hamsik